Over the usual Inglesport breakfast we discussed options for the day's trip. There was concern that the recent rainfall might have make the planned Boundary Pot on Ease Gill a little too wet and as such it might be a pointless walk over to it just to find out it wasn't suitable. After a few options were discussed, Bull Pot was agreed.

Parked in the layby ~600m before Yordas, changed, ropes sorted into 3 bags (bag 1 with a 20m for pitch 1 & a 30m for pitch 4, bag 2 had a 55m for pitch 2 & 3 and bag 3 had a 30m for the final pitch) and walked up the hill arriving at Bull Pot ~ 11:15. I had carried bag 1 so rigged the first pitch. Since my last trip down Bull Pot (Oct 2014) the pitch had changed and was no longer going off the big boulder by the remembrance plaque, but instead off the right hand side so didn't need a deviation (see doctored CNCC entrance photo image below:- 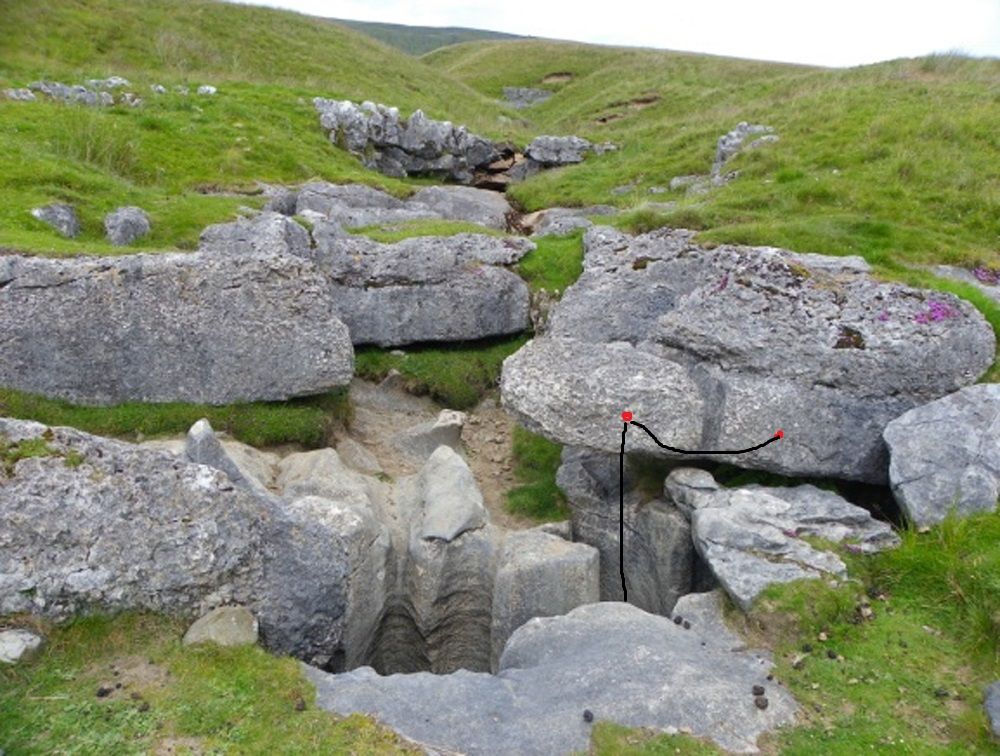 Andy followed next as he had bag 2 and rigged the next 2 pitches going through the slot rather than the wet gully route. I took the lead again to do pitch 4 which required 2 sizable swings/pushes/runs along the walls to get to the deviation anchors - it was rather fun!

Ian came down next and while I'd started wandering away from the bottom of the pitch, I heard my name being shouted. I quickly went back to the pitch but couldn't immediately work out what was being said. Looking up at Ian swinging around, I figured out he wanted me to pull down on the rope to help him reach the deviations 😂. This helped Ian, followed by Andy and Roger, get down.

By the time Roger and I got to the narrow traverse to the final pitch head, Ian was squeezed in, rigging with Andy looking on. Roger and I decided not to join them just yet and waited for a bit more progress (and space!) before moving in. A short time later (after several grunts and other constriction induced noises came out of Roger) we all got to the bottom of the final pitch.

With not much to do we started the ascent out of the cave and I volunteered to de-rig the final pitch, Roger did the 4th, I did the 3rd and 2nd with Roger finishing off with the 1st pitch, and we were all out by 3pm

On the surface we briefly spoke about how little water there was throughout the cave, which I found odd considering the reported rainfall over the previous couple of days. I made a mental note to investigate a bit more once home.

Overall, another great trip and we all went to the Marton Arms for a quick drink 👍

As noted, we were surprised by the lack of water at throughout Bull Pot. Considering we'd chosen to do pot because of the reported rainfall the previous day(s), it made me hypothesise that due to the local hydrology, Bull Pot perhaps floods quickly/drains quickly following precipitation.

I found Weather Underground historical data for Ingleton which shows there was no rain for the majority of the preceding week, but heavy rainfall 48-36 hours before our trip. I'm not knowledgeable enough to know how the air temperature would have affected things, but I've included those in the screenshot for future reference

I also looked at the Environment Agency's river level data for the River Wenning at Bentham Bridge (the nearest as the crow flies to Bull Pot) and found that the river level peak coincides with the rainfall, but tailed off close to pre-rainfall levels by the time we were venturing underground 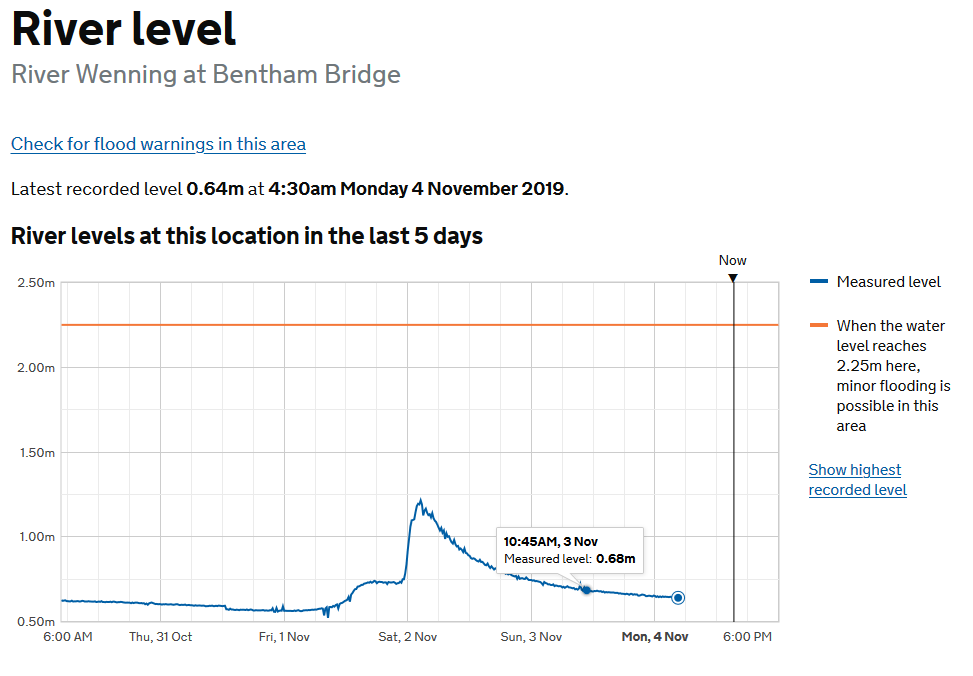